Why I Love My Job

Mandi Steward is the Marketing Manager for SOMO. She has worked here for six years. Reach her at steward@somo.org.

I often have a really hard time describing why I have such a passion for my job and what the athletes have brought to my life. So today, I’ll share a story of one of the moments that keep me hooked.

The summer of 2010, we had Special Olympics National Games in Lincoln, Nebraska. It was an incredible week with so many powerful moments. There are a ton of memories that I’ll treasure for years — Team Missouri’s fans were named the Super Fans of the Games; our softball team was so good that they were defaulted gold medals because there was literally no competition for them; our young flag football team overcame the odds to win the national title; and I watched dozens of my friends reach their personal bests, earn medals and make their families proud.

If I had to choose one moment that really exemplifies Special Olympics, it would be from one of our powerlifters, Nick. Nick is a little shy, but his face always lights up when someone talks to him. So in the few years I’ve known him, I’ve always made a point to say hi when I see him. We only had two powerlifters at National Games (our other one, Rob, is quite charismatic as well), so everyone knew them.

A little background: Powerlifting was held in a theater on campus. Both of our guys did the bench press and the dead lift. And then they’re done. All their training comes down to two lifts. Luckily, in scoring they also get a combination score, so they have the chance for a total of three medals.

I didn’t get a chance to watch Nick lift, so I couldn’t miss his awards. The theater was packed with cheering fans, which is such a cool atmosphere that there’s no way I can convey it here. All I can say is that Special Olympics fans are the best. Our athletes are treated like celebrities. Each time a heat of powerlifters got their medals, the crowd exploded into cheers, giving them praise and attention that no one could have anticipated.

Nick’s division was up pretty early. As they walked out, we could see that Nick was going to be placed at the gold medal, so Missouri fans were immediately on their feet. Luckily, his family had seats that were front and center. As soon as Nick stepped onto the stand, a huge smile broke out across his face. When the gold medal was placed around his neck, he threw his arms up into the air, victorious. He caught sight of his family and beamed even brighter. He looked out at the crowd, probably a bit overwhelmed for a split second.

Nick flexed his muscles. The crowd erupted. He struck a pose. The crowd howled. He struck another pose, and the entire audience was on their feet. Suddenly, the two other athletes on the stand figured out what was happening, and they simultaneously struck poses of their own. The three engaged in a full pose-off for a good two or three minutes before anyone could coax them off the awards stand. And the crowd loved it.

That, I thought, is what a champion looks like. That is the type of sports figure we should look up to. That is someone who deserved to milk that moment for all it was worth. That moment will be forever etched in my brain. Even now, my heart swells with pride and it makes me a little teary.

Nick ended up sweeping his division, winning all three gold medals. He was the talk of our dorm. It was early in the week, so everyone wanted to see the medals. Each night, our coaches would all gather in a conference room to run down the day’s events. That night, we were in the middle of our meeting when we heard this clank-clank-clank from down the hall. We all knew what it was, so the room fell silent. Nick was about three steps past the window into the conference room when he realized we were all staring at him. He turned, almost in slow motion, and held up his three gold medals as this sly smile crept across his face. We all cheered, again. 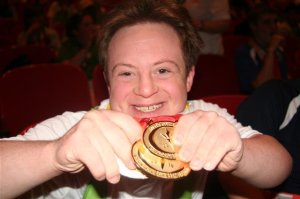 It’s hard for me to describe the way Special Olympics makes me feel, but I’ll say this: it’s addictive. I get to witness these moments of greatness. For just a second, the world stops for our athletes. They own it. To see this for a group of people who are often ignored, avoided or ridiculed is simply incredible. It’s a happy place, a place where everyone is celebrated and accepted. And that includes me, too — I won’t pretend there aren’t benefits for me. Our athletes are the stars, but a quick hug or a high five tells me that they’re glad I’m there. When I see an athlete seek me out from across the room, I’m reminded that they want friendship more than almost anything. When they show me their medals, I feel like I’ve won, too.