Unified Sports(R) Offers Benefits to People of All Ability Levels 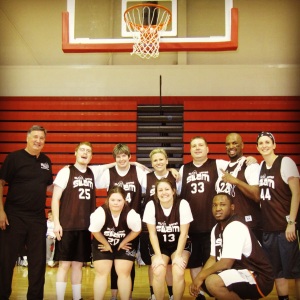 St. Louis Arc is one organization doing its part to make sure that the Unified Sports program grows in the city.

“We have had a long-standing relationship with Special Olympics because many of the Arc athletes on our basketball teams and bowling leagues have also participated with SOMO for years,” said Arc Coordinator Brianne Henrichs.

The St. Louis Arc is a non-profit United Way agency that provides support and services to more than 3,500 adults and children with intellectual disabilities and their families throughout the St. Louis Metro Area.

The groundwork for a great working relationship between SOMO and the Arc was already laid, but when Henrichs first saw a Unified Sports game she was so excited about the possibilities at the Arc that she wanted to get involved.

“Admittedly, it was mostly because of my desire to play!” she said.

Following a SOMO basketball tournament in 2012, Henrichs and Arc staff created their Unified soccer team and things have been fantastic ever since.

“In my opinion it has gone great and everyone seems to be having a wonderful time! Every league is Unified and anyone can play no matter their ability. I think it will grow as people continue to get the word out,” she said.

“Once people join, they are hooked and then they tell their family and friends about it. It’s easy to get hooked because it’s a blast! I would love to see this become a trend in St. Louis.”

The Arc has grown the program from only one team in basketball and soccer to three teams in both; they will be branching out to offer softball this summer.

For Brianne, the program is more about making friends than winning.

“The biggest takeaway that I have gotten from these teams is that recreation is a platform for community equality,” she said. “Each person reaps the same benefits from playing on this team no matter his or her ability…

“My friends that play on these teams have all been competitive athletes and many of them have told me that the ‘Arc United’ teams are the best teams that they have ever played on.

“It reminds me of why I fell in love with sports – it’s pure.”

Some might think that assimilating athletes without intellectual disabilities with SOMO athletes would be a difficult process in the beginning, but Henrichs said it’s been “simple.”

“I haven’t run into any struggles,” she said. “I have found that less is more and everyone is accepted for their differences. You don’t have to do much when you explain the rules, teach the basics and throw the ball out there and just play.

Henrichs said the best piece of advice she could give to other programs thinking about creating their own Unified Sports team is to just “do it” and the rest will fall into place.

“I find myself leaving my other recreational teams and only playing on our Unified teams,” she said.

“To say that it’s been a positive experience is an understatement.”