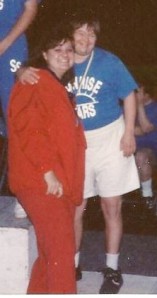 In May 1991, I graduated from Pittsburg State University with a Bachelor of Arts degree in communication with an emphasis in public relations and a minor in business administration. Like any other college graduate, I hit the pavement to find a job. In August 1991, I was offered the position as the Missouri Special Olympics Area IV (now KC Metro) Administrative Assistant. I had the choice of taking the job with SOMO or being a marketing assistant who helped market modular prisons where I would make more money, but I chose to take the route of a more fulfilling job. Little did I know that it was not only a fulfilling job, but one that seeped deep within my soul to the point that I cannot imagine my life without Special Olympics.

Kim Wallace and I first met in 4th grade. She was shy and I was outgoing. She was short, I was tall. She liked to study and read, I liked to talk and socialize. We were complete opposites, but we soon became the best of friends and still are as she was the matron of honor at my wedding 17 years ago. Kim was the second to youngest of 5 kids and her older brother, Richie was born with Down syndrome. I had never been around individuals with Down syndrome and I was little apprehensive at first but when I saw how Kim’s family interacted with Richie and didn’t treat him any differently, I realized that Richie was person just like me. 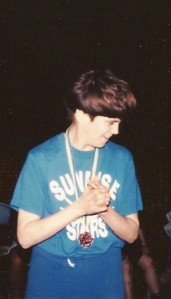 Soon after, Nikki Oliver and I because good friends through girl scouts and dance. Her mom, Nancy, was my dance teacher. Nikki was the youngest of three girls and her oldest sister, Mindy, had an intellectual disability. I would often go to Nikki’s house after school and Nikki, Mindy and I would hang out. I loved being with Mindy. She was always so happy and smiling all the time. She would get excited when she saw me and ask me a ton of questions (always the same questions, but I never got tired of answering them). She would watch us practice dance and tell me I did a good job. She would cheer for us at our volleyball and basketball games. Mindy was always that lift I needed.

As my career with SOMO began to evolve, I became the first Missouri KC Metro Area Director. Special Olympics Kansas and Special Olympics Missouri decided to embark on a new adventure and join the two area programs since the only thing that divided us was State Line Road. The Kansas KC Metro Area Director and I combined our largest event, our Area Spring Games (track and field). It was at this event that everything came full circle for me. Both Mindy and Richie participated with Special Olympics Kansas and they competed at this event! I was honored to get to present Richie one of his medals and be there when Mindy received one of her medals. I had grown up with these two individuals and now I had planned a competition for them to be able to showcase their abilities. Looking back, this was at the top of the list of one of the highlights of my career.

Fast forward to 1996 and there is an opening at the then “State Office” (now Headquarters) as the Special Events Coordinator. I had spent 5 years in Kansas City and decided it was time to try my hand at something new. I got the position and transferred to Jefferson City. I was trying to find my way, was missing my friends and family and had become good friends with the Brimer Family at the 1995 World Games. Gary Brimer was the Director of Sports and Training at that time. Gary would invite me to spend the weekends with his family and asked me if I wanted to coach the Unified® Basketball team that he had coached at the World Games because he couldn’t anymore due to his position with SOMO. I said sure, and that’s when my life took another turn.

With Brian, my husband

There was this guy who started coming to basketball practice on Sunday evenings just to work out with the team. He had red hair, blue eyes, a great smile and nice legs. One thing led to another and we started dating. I wasn’t as happy in my new position because I really missed planning the sporting events for the athletes. Next thing I know I was engaged, and that’s when I decided maybe I wanted a job that was 8 to 5, Monday through Friday, so I decided to move on from SOMO. I got a job with the Missouri School Boards Association (MSBA), married that red-haired, blue-eyed hunk, Brian Lutz, but still remained very involved as a volunteer with Special Olympics Missouri.
During what I like to call my three-year sabbatical, I was able to realize just how good I had it with SOMO. I gained new skills and really grew up at MSBA, but there was always something missing and that was the mission, the athletes and the people.

In 1999, the Northeast Area Director position opened up and my life took yet another turn when I had the tremendous opportunity to come back “home!” I started back with SOMO on August 16, 1999 and that very same day Brian and I found out we were expecting a baby!

Rachel and her SOMO basketball team

Now 15 years later, I am the Sr. Director of Programs, still married to that hunk who has the same passion for SOMO, and we have a beautiful 14-year-old daughter, Rachel, who also shares the same passion and not because she has been going to events since she was in the womb! She truly loves working with the athletes and actually plans to become an early childhood special education teacher and maybe someday she will run the Young Athlete Program in Missouri!

Working for SOMO isn’t just a job, it’s a passion. I often tell people how fortunate I am to wake up every morning and say “Yes, I get to go to work!” I have met so many wonderful people and made so many lifelong friends.

I have planned and organized events for the athletes to compete, trained athletes to do public speaking and had the pleasure of seeing them succeed in sports and in life.
I watched Jared Niemeyer run his first race and most recently beamed with pride as he was invited to the White House to celebrate what he has done to promote a world of inclusion, acceptance and respect. I own the very first children’s book that Jamie Graham wrote and illustrated. I cheered Robb Eichelberger onto a gold medal finish in tennis at the 2006 National Games, and now he serves on the SOMO Board of Directors. My one and only experience as a Unified partner in bowling was with my friend Shirlene Treadwell and when I couldn’t knock a single pin down, she was there to encourage me all the way. I remember how Danny Duvall would always give me a hug every time he saw me and the day he was inducted into the SOMO Hall of Fame, just weeks before he passed away after his battle with cancer. 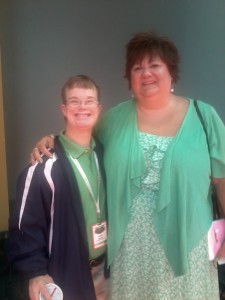 I am one Kansas girl who is glad I followed the yellow brick road to Missouri 23 years ago. I found my “Emerald City” in SOMO and the great Wizard of SOMO, Mark Musso, who gave me a home in SOMO, not once, but twice and I am very fortunate to call my boss!

Along the way I met the good witch, Diannah White, who was my supervisor and mentor for many years. She is now the Executive Director of her church and is one of my dearest friends and role models.

Susan Stegeman is the not-so-cowardly lion who has the courage to lead the development team to raise the funds to support the more than 17,000 athletes in Missouri.

Mary Lou Hammann, is the brainy scarecrow who leads the operations team and is the brains behind our organization and making sure that we operate efficiently and with integrity.

Then there is the tinman, Gary Brimer, he is the heart of SOMO who has built the sports program to what it is today and has taught others to do the same.

While I may not own a pair of ruby red slippers like Dorothy, I can honestly say “THERE’S NO PLACE LIKE HOME!” Thank you for the past 20 years and I certainly look for forward to the years to come!