In a surprise presentation at the Chateau on the Lake in Branson, athlete Danny Duvall of Kansas City and coach and advocate Mark Bussen of St. Louis were inducted into the Special Olympics Missouri (SOMO) Hall of Fame.  They believed they were simply attending a Special Olympics Missouri Annual Awards Luncheon to find out how else they could further the athletes’ cause when their names were announced at the Hall of Fame luncheon.

SOMO can induct up to two athletes and two non-athletes into the Hall of Fame each year.

Duvall and Bussen will be recognized alongside the newest inductees to the Missouri Sports Hall of Fame, including former St. Louis Cardinals outfielder Willie McGee, longtime MU announcer Gary Link and 14 others.  The enshrinement ceremony takes place at the University Plaza Hotel and Convention Center in Springfield on Jan. 26 at 4 p.m. 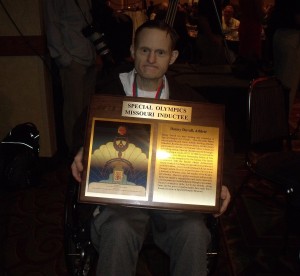 Danny Duvall has been training and competing in Special Olympics for 37 years.  Over the years, Duvall has competed in golf, bocce, softball, bowling, athletics, basketball, floor hockey and powerlifting.

In 2006, Danny participated in the first ever USA Games in Ames, Iowa in bowling setting a Special Olympics record for single-game bowling at a score of 231.  In 2008, he received the Special Olympics Missouri Outstanding Athlete of Year award and was recognized by the Kansas City Sports Commission with the Special Athlete Achievement Award.

In addition to being recognized for several honors as a SOMO athlete, Duvall won the Bishop Sullivan Award through Catholic Charities in part because of his work as a Eucharistic Minister, usher and member of the Knights of Columbus.

Danny is a global messenger and has made numerous speaking engagements and media interviews over the years to promote the Special Olympics movement.  Duvall’s contagious smile, fun-loving attitude, giving heart and his spirit of sportsmanship have made him a household name in Special Olympics Missouri.

Mark Bussen became involved with Special Olympics Missouri in 1997 as the coach of the West County Special Olympics team.  He has two passions: sports and the great rewards that such activities bring and an overwhelming desire to make an impact on the lives of people.  He always had a special connection with individuals with intellectual disabilities, so it was a natural fit for him to coach SOMO athletes.

Through his leadership, the West County team is one of SOMO’s premiere programs with more than 40 athletes involved.  He tirelessly supports SOMO through his charitable efforts, raising more than $15,000 in the annual car raffle.  As a business leader, he has also built goodwill among several industries helping to generate nearly $50,000 annually.  In 2005, Mark was recognized as the Outstanding Coach of the Year.

He takes his role as coach and advocate beyond the playing field and touches the lives of so many through his generosity, dedication, enthusiasm and charisma.  As one athlete said, “Mark Bussen is the best coach in Special Olympics!”

For more information or to learn how you can support Special Olympics Missouri, contact Brandon Schatsiek at Schatsiek@somo.org. Information about the Missouri Sports Hall of Fame Enshrinement can be found at www.mosportshalloffame.com.