At the age of 43, Krippel has been an athlete with Special Olympics for more than 30 years. His mother, Joyce Krippel, knows that it’s something he’s not quite ready to give up.

Krippel began competing with Special Olympics Missouri at the age of 14, and his love for sports has blossomed throughout his involvement. From softball, soccer and basketball to swimming, snow skiing and hockey, there isn’t a sport that Krippel doesn’t enjoy. According to his mother, however, basketball is his first and true love.  This can be partially attributed to his hero, Michael Jordan.

“He wants to come back as a Michael Jordan,” his mother said. “There isn’t one thing in his room that doesn’t have Michael Jordan on it.” 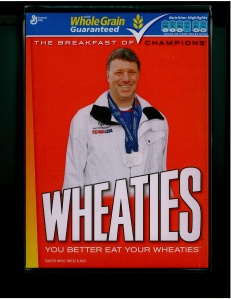 Matt Krippel is such a great athlete that he even made a Wheaties box! Sure, it was with the help of Joe Koppeis, his boss from the local grocery store in Columbia, Ill., but not many athletes have had the honor of gracing the front of a Wheaties box.

Krippel’s first trip to the Special Olympics World Games occurred during the summer of 1991 in Minneapolis – St. Paul, Minn., where, for the first time, he had the opportunity to swim against athletes from all over the world. More than 100 countries attended, and his mother gave him fair warning about the competitiveness of the athletes he would soon face.

“I told him, Matthew there are kids that have learned to swim before you learned to walk. You’re going to have a tough time, because they’re good swimmers.”

Krippel performed exceptionally well, winning various medals and ribbons in his events.  He did, however, lose in freestyle to an athlete from Barbados.

“When we got back home, he got the world map out of the bookcase and asked me to show him where Barbados was,” said Joyce. “So I showed him that little dot in the Atlantic Ocean.”

It was this exact determination and competitiveness that drove Krippel to immediately accept an invitation to compete as an alpine skier in the Winter World Games this past January, despite only 34 days of advanced notice after another athlete had to drop out due to an injury. There was no hesitation. Krippel was eager to experience a World Games outside of his own country, and his mother said he even fought through his fear of shots to do so.

“When I took him to his doctor and she said you have to get all of these shots before you go, he rolled up his sleeves with no problem.”

The 2013 Special Olympic Winter World Games took place in PyeongChang, South Korea, and Krippel competed in various snow skiing events, winning both a silver medal in the Advanced Slalom competition and a gold medal in the Super G competition. Despite training and competing on the Missouri side of the border, Krippel was welcomed home to Columbia, Ill., with a parade led by Columbia Police and Fire Departments; he is a hometown hero to many.

Because of these outstanding athletic achievements, Jocelyn Diehl, SOMO’s St. Louis Metro Program Director, nominated Krippel to be inducted into the St. Louis Sports Hall of Fame Class of 2013. He was awarded the Special Athlete of the Year award on Nov. 20, 2013.

Matt Krippel, back row, far right, poses for a photo with the rest of the St. Louis Sports Hall of Fame Class of 2013. Other inductees included Brett Hull, Joe Torre and many others.

This award, as well as Krippel’s reputation as a model athlete, was the reason Diehl also nominated Krippel for SOMOian of the Month.

“The St. Louis Sports Hall of Fame is an amazing honor and one only few athletes will experience,” Diehl said. “So I thought this month, in which he received that award, would be perfect to spotlight Matt Krippel. He’s been involved in the program for over 30 years, so he’s gotten many opportunities to compete, but he is so humble and thankful for each one.”

While sports still remain Krippel’s passion in life, he is involved in many different things outside of his commitment to Special Olympics.

Krippel lives across the street from Columbia’s local fire department, and he has been awarded the title of honorary fireman.

“I help out a lot. I have a pager, and when the pager goes off, I respond to the firehouse,” Krippel said. “I open the fire doors, and I help the firemen get their gear and stuff like that. And then they teach me how they run stuff.”

“He’s got a great work ethic,” said Koppeis. “He really works hard, and he really cares about what he’s doing. I’ve never had him say ‘No’ to anything.”

In addition to all of this, Krippel also finds time to work with the basketball and football teams at Columbia High School. For more than 20 years, Krippel has worked closely with the football team, and over time he has evolved into the equipment manager.

“He’s there for all the practices, all the games,” said Joyce. “He makes sure the boys have the water cooler filled, and he’s the ball boy that takes it out to the referee. They take him everywhere.”

Krippel loves working with the team, and according to his mother, the team adores him too.  Krippel said that they even have a nickname for him.

“They call me Coach Kripp.”

Although Krippel’s success as an athlete is definitely something to brag about, his overall character is what truly sets him apart from his peers.

“I get on an elevator in St. Louis somewhere and Matt knows someone on that elevator,” said Joyce. “We go to Wisconsin to the Dells, and he knows somebody at the restaurant. This kid has so many friends and so many contacts.”

This alone is a testament to how likeable Krippel truly is. Those that know him best can vouch for that. He is loved by everyone and is someone who never gets angry. His mother says she’s never even heard him say he doesn’t like somebody. He is loving, caring and on constant lookout for ways to help those around him.

Krippel also has a desire to be active all the time, hence his passion for sports.

“Sports are so very important to him,” Joyce said. “If he isn’t playing them, he’s watching them.”

And what about his need to be active?

“He can’t sit down for very long,” said Joyce. “Watching a movie is out of the question. There’s too much downtime.”

Matt Krippel is a dedicated athlete who is loved by many, and he shows no signs of giving up his passion anytime soon. This is because of how much Special Olympics means to him and his family, as well as the direction it has given him in his life.

Matt Krippel accepts his plaque that officially announces his reputation as a model athlete and the 2013 Special Athlete of the Year in St. Louis on Nov. 20, 2013.