Jeff Cook, right, poses for a photo with Joey Garrard at the State Summer Games

Years at O’Fallon PD?
16 years (5 ½ years at St. Charles County Department of Correction prior to that)

What’s your story on how and why you first got involved with Special Olympics?
I was assigned to the Community Service Division at our department and was asked to help sell Torch Run T-shirts in August at the Shop ‘n Save event in 2003. My Sergeant, Ray “Tiny” Sanders, I was working for a the time helped to open my eyes a little to SOMO and LETR. The more I learned, the more I became more interested. In 2005, when he retired, I had the opportunity to take over as our Agency Coordinator and I jumped at the chance. In 2006 I had the chance to attend my first State Summer Games and attended my first International LETR Conference. Those two events were significant in catapulting my involvement and commitment.

Have you done a USA/World Games Final Leg before? If so, when?
No, In order to share the opportunity Missouri only allows an officer to attend a USA Games or World Games one time at this point.

What are your expectations on doing this World Games Final Leg?
My expectation is to once again be blown away by the movement and the impact of Special Olympics. The Law Enforcement Torch Run has been allowed to be a part of the lives of the athletes and families for so long and now I get to help spread the word in a part of our country that is about to play host to their biggest competition.

Why were you selected/what was the nomination process like for this?
It is my understanding that this was a selection process conducted by the senior members of SOMO and the LETR committee.

What about Special Olympics keeps you coming back/what’s your favorite part?
I don’t know what it is that keeps me coming back, it is a part of me and my family at this point. It’s just what we do. We don’t think about it, we just plan for the next event, fundraiser, games or whatever. SOMO and LETR is as much a part of my family as anything. I never overlook an opportunity to talk about the athletes or law enforcement’s connection to them. We have had a good life as a family and if giving a little bit of our time to be a part of their success is all they need I’m in. 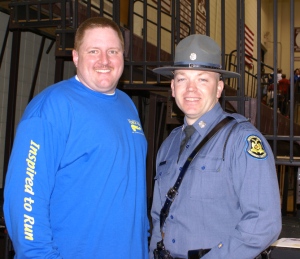 Jeff Cook, left, poses for a photo with Jeff Fugett of the Missouri Highway Patrol