Special Olympics has partnered with the University of Missouri and University of Arkansas to create our own Unified Rivalry series. The idea is that Special Olympics teams play each other just before the college rivalry games. SOMO will be playing a flag football game against Special Olympics Arkansas athletes on Sunday, Nov. 22 at 2 pm at the Walker Pavillion on the Arkansas campus. The team which raises the most money leading up to the game will earn a 3-point advantage. Help Missouri win by donating here! 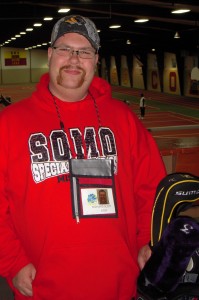 What makes Richard Scott, a 34-year-old Lee’s Summit resident, an outstanding athlete? Maybe it is his incredible record that spans over two decades in sports such as bowling, bocce ball, flag football, tennis, golf, basketball and softball for Special Olympics Missouri (SOMO). Maybe it is his dedication and love for his teammates that makes him great. Whatever it is, there is no denying Scott is unstoppable and ready for any challenge.
Scott credits his parents for helping him get involved in one of the best commitments that has added so much more value to his life. Before getting involved with SOMO, Scott recalls not having any drive to even play outside as a kid. When he was eight years old, his parents encouraged him to participate in SOMO to create a fun, social and athletic outlet for his free time.

The first sport Scott participated in through SOMO was softball. Once he started softball, Scott explains, “I never stopped. I kept getting involved with others.” Evident by his incredible record, he has mastered several sports. Since getting involved with SOMO in 1989, Scott has gone on to place fifth in tennis at the 1999 World Games in Raleigh, North Carolina. More recently, he won the bronze medal at the 2010 National Games in Unified Golf, a team composed of individuals with and without intellectual disabilities.

Over the years, he has accumulated more than awards; he has also gained many memories and experiences. His favorite part of being involved in Special Olympics Missouri is, “Getting to know teammates, meeting new players, spending time with younger kids, messing with the younger kids, and watching them in sports having a wonderful time.” He is looking forward to working with his teammates this Sunday for the Unified Rivalry flag football game against Special Olympics Arkansas.

Scott is extremely excited for the upcoming game against Arkansas. He is playing center for his flag football team and has been practicing very hard for the game. He just wants to “Get out there and win this thing!” Scott said, “We’ve just got to beat these guys for flag football! I look at the team, they look at me, and we know we have the plays and the strategy to beat them. I told them, we can always mix the plays up if they get confused.” Scott is confident in his team’s ability to beat Arkansas. He knows their practice and strategies have prepared the team for the big game.

Scott has evolved since joining Special Olympics Missouri. He is not the same eight-year-old boy who did not want to play outside; he has become a proud athlete, role model and so much more. In addition to competing with SOMO, he is a loving brother, an involved uncle to a nephew and niece, and a hard worker at a Toys ‘R Us warehouse. Scott strives for excellence in all aspects of his life, not just sports. He works 52-60 hours a week and makes time for his other hobbies. When he is not working, spending time with his family, or playing sports, he is spending hours and even days on his artistic hobby, making artwork and framing them for loved ones. Scott says he even surprised his flag football coach with one that matched the colors of her house.

Richard Scott is undoubtedly a man of many talents and interests. He is considerate, hardworking and gives his best on and off of the field. Scott is a team-player, leader, and most importantly he is always ready to win!