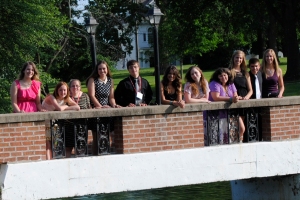 Today’s theme was “Meet the Crew.”  After getting adjusted into their councils and getting to know everyone, the athletes did not take very long to send the chaperones away.  They learned much about setting goals today and even had to set some their selves.  Matt Z. is going to be president and with all the friends he has made so far, I am sure he can get enough votes.

Matt. Z and Matt C. are returning campers this year and are doing a great job of being leaders and helping out.  Isabelle decided after the pep rally today that camp was pretty cool.  Mystie, Morgan and Crystal are very social butterflies and were making many new friends during rec time.

I think Dustin and Sabrina are enjoying their level 1 experience as well.

After dinner, the campers got to compete in their very own Olympics.  They decked out in their teams’ colors with faces painted and competed in games.

Brittany, Andrea and I are returning chaperones this year.  Morgan S. has been here before but she and SOMO staff, Aimee, get to experience camp for the first time this year as chaperones.  All of us chaperones are loving the athletes so much!

It was a very long but great first day! Looking forward to the rest of the week.

I think your campers were a little tired today.

This morning we listened to a great presentation by SOMO YAC president and JC, Whitney.  MASC was announced as a new partner of Special Olympics Missouri as well.

Then they spent the afternoon project planning and working on a song for songfest.  Each year the campers get more creative and this year was no exception.  I am pretty sure I caught almost each of them dancing on stage.  Yes even quiet Isabelle and Dustin were dancing with their councils.

The athletes continue to make friends and almost all of them have decided they don’t need the chaperones around.

Its been another fabulous day.

If we thought we were tired yesterday, that was nothing compared to today.  It was a long day, but I think the athletes had a blast.

This morning, Marty talked to the campers about gusto.  He really inspired everyone to put their heart in to what they do and have spirit.

The campers went through workshops and then spent much of the afternoon at the park doing team building exercises.  I am very proud of all them.  In one of the exercises, the camper would fall back to their council and the rest of their council would lift them up.  Each of them did it.  I even did it and it was scary.  It was very hot out today and they kept going all afternoon.

They finished of their evening with the street dance.  Most all of the athletes danced and some watched Wreck It Ralph.  Matt Z. and Isabelle owned the dance floor.  Morgan, Mystie, Matt C. and Crystal hung out with their councils all evening so we barely saw them but could always tell they were having a blast.

We have a great group and the athletes are having the time of their lives!

It’s the end of the last full day in Fulton.  You should probably expect some crying campers tomorrow as it will me emotional when they say their goodbyes.

We started day 4 off great with a Flag Day presentation by Marty.  He gave us some enlightening history on our nation and made each camper feel proud to be an American.  They showed the video that level 2 made this week.  Their challenge was to create a flag on the wall out of cut out hands and they succeeded.

In the afternoon, the campers listened to Karen talk about “warm fuzzies.”  They were then given a yarn necklace with a ball of yarn pieces at the end of it.  They would go around and say one nice thing to people and tie one of their pieces of yarn on to the other person’s necklace.  This struck some hearts and there were happy tears as it hit that today was their last day with their new friends.

They all got dressed up and we took some pictures together.  Then they headed off with their councils to eat at the banquet.  After many pictures with their friends, they gathered in the dome for the councils presentations.

They were all given glow sticks in red, white and blue.  Then, they headed out to the pond to end the night together, reflecting on their amazing MASC experience.

I know they have all learned many life lessons this week and have become better leaders.  I’ll be sad to say goodbye tomorrow to them.  I won’t be saying goodbye to Morgan C. and Matt C. for too long as we all will be off to Sports Camp next week.  I know your campers will be excited to see you tomorrow.  They won’t forget the memories made here in Fulton.

I hope you and your campers made it home safely.  I made it back home and am already back to Sports Camp to get ready for the athletes.  We had a great last day.  It was definitely hard to say goodbye.  After finishing letters, a last general session and many goodbyes and hugs, we all headed out and left Fulton.  I hope your athletes had a great experience this week and brought back tons of ideas.  I loved spending the week with the athletes and look forward to seeing them again soon!

Rachel Antal is a college student, longtime volunteer and member of SOMO’s Youth Activation Council. She attended the Missouri Association of Student Councils summer camp a few weeks ago, along with several SOMO athletes.