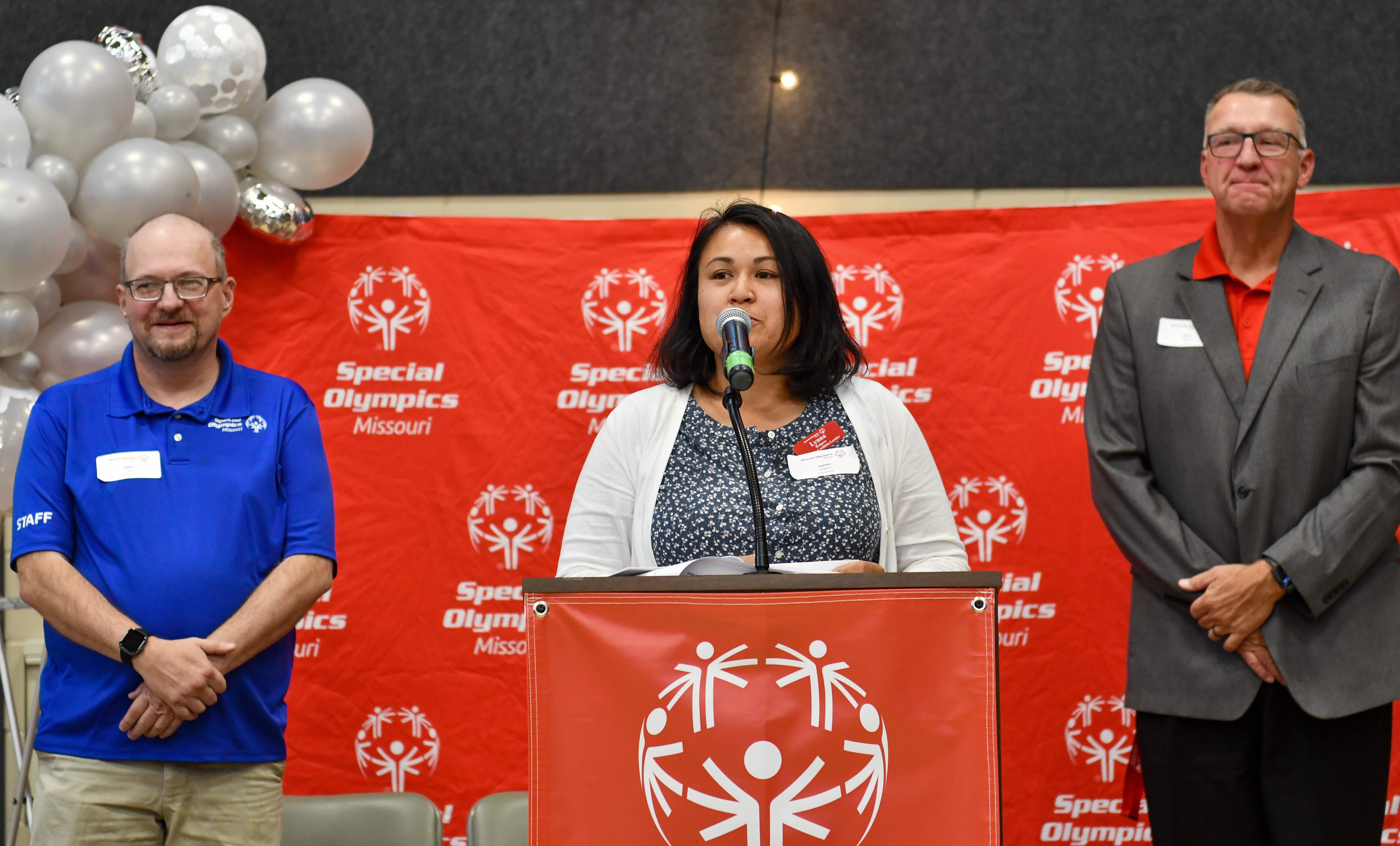 Special Olympics Missouri athlete leader Lynna Hodgson recapped our 2022 Leadership Summit in her blog below! You can check out more of her pictures here.

“We met up with Britani and her family at 9:25 a.m. We are on our way to TLC. On the way, we watch one of the Shrek’s movies. I forgot how funny that movie was. We arrived at TLC at 11:15am. When we walked to the doors, we were greeted by Carol Griffin (she is apart of the health team of SOMO. Once we got into the building we checked in and got our name tags. We found a table and sat there. Then I got up and went to find Pete (who is in charge of ALP’s) got my graduation gown and cap. I went to set up my presentation and let people come by and then I would talk about my project. I shared a table with Anna. She is another health messenger. She is also graduating. Kayla (PR) asked if I could announce the athlete if the year, and I said I would be happy too, she handed me the envelope and we see if I could pronounce the name, and I could. Two athlete leaders who ran the ceremony welcomed all of us, and announce lunch was ready. They asked if the ALP’s graduates would eat first. It was a very yummy lunch and dessert. When I got done. The guest speaker spoke, which he is from Illinois. His speech was very good and entertaining. Then SOMO got ready for the ALP’s part. Pete said a few things and read off our bio’s, and called us off and we got our certificate (some athlete leaders got two because they did two majors) we couldn’t have a ceremony until now, so there was a lot of people who would get two majors. After the ALP’s part, the 8 graduates who attended, and 4 couldn’t attend, and 1 athlete leader who passed away. They remembered him very nice. They gave his parents flowers and dad a few words for him. It was very touching. They moved on to the 2021 annual awards. They read off each name that got nominated for each category and said who won what. I announced the athlete of the year, so that was exciting, I was very happy to hear which athlete who received it. After all of the winners were announced, they announced the 3 hall of fame inductees. Was 2 athletes and one volunteer. They also played congrats video, I helped to get videos. The last award they announced was Eunice Kennedy Shriver Award of Excellence. And that award went to the company called Diamond. After the ceremony was done, I visited, said hi, congratulated everyone, and got pictures with people. I found Andrew (another PR person) and we went to find Daniel to see if I could interview him. And he said YES! I interviewed him with Andrew help. Andrew said he would send me the recording sometime this coming week. I went to say goodbye to everyone, and found Britani and her family so we could leave. I told them congratulations again for being the KC metro winner for the family category. I got a picture with Larin. Then I took their family picture. Then we all got in the van, and back to Oak Grove. Susan Shaffer left before we could say goodbye, but that’s okay. On the way home we watched another movie. I almost feel asleep. And with that, that was my day. I had so much fun seeing people I missed that I haven’t seen in awhile, graduating to all the winners, getting my ALP’s Technology major, sharing my capstone project, meeting Daniel and spending time with my second family, SOMO.

I want to say a BIG thank you to Britani and her family for allowing me to ride with them, and thank you to Andrew and Kayla, for helping me. Here is the interview I did with Daniel!“

ATHLETE OF THE YEAR

COACH OF THE YEAR

VOLUNTEER OF THE YEAR

FAMILY OF THE YEAR

The ceremony continue with SOMO officially inducting its Hall of Fame Class of 2022. Three individuals went to the SOMO Hall of Fame!

Tanner Hrenchir is the epitome of what SOMO is all about. Over the span of the last 31 years, Tanner has been a leader for the North Area athletes. He has had a tremendous impact on the growth of the program by serving as an advocate for the start of so many new sports, such as volleyball, golf and tennis. Tanner gives 100% of himself in every sport he participates in. His dedication to sports continues to grow every time he steps on the field, in large part due to the confidence he has obtained through his participation in SOMO. Tanner is one of the most decorated athletes in SOMO history. In 2010, Tanner was selected to be a part of Team Missouri for the Special Olympics USA Games in Lincoln, Neb. He dedicated an entire year to practicing and training to better himself for the week-long Games. It all paid off as he came home with a silver and bronze medal, along with two fourth place finishes. A few years later, Tanner was selected to compete on Team Missouri’s flag football team for the 2014 USA Games in New Jersey. Most recently, Tanner was Team Missouri’s lone powerlifter at the 2022 USA Games in Orlando, Fla. He came home with a gold, two silvers and one bronze medal.

Simon Caldwell has been involved with SOMO for 21 years. It’s safe to say he’s made the most of his time with SOMO! Simon graduated from Savannah High School in 2006. Since then, his SOMO career has flourished. Simon has competed in several sports, including basketball, flag football and tennis. Simon’s tennis skills took him all the way to the 2010 Special Olympics USA Games in Lincoln, Neb. He earned a gold medal in men’s singles! In 2014, Simon was back at the USA Games in New Jersey. He competed in modified flag football for Team Missouri. Four years later, Simon participated in his third USA Games in Seattle, Wash. He competed in singles and doubles tennis! When Simon is not training or competing, he works at Special Industries. He’s now worked there for 15 years! Simon has always displayed excellent sportsmanship on and off the field, and he has brought awareness of SOMO to his community. Simon is a former president of the Savannah Lions Club. He has been with the club for 12 years.

Jeffery Fugett began volunteering for SOMO in 1999. He has served as the Missouri State Highway Patrol Troop D Agency Coordinator since 2005, working with fellow officers to raise funds and recruit volunteers for SOMO athletic events. He is the Region 3 Law Enforcement SOMO Coordinator for 23 counties in Southwest Missouri, where he coordinates and assists law enforcement agencies with torch runs, fundraising and other event planning. Jeffery has been on the State Summer Games’ Games Management Team roughly a dozen times, helping coordinate the final leg of the torch run, setting up equipment, setting up for opening ceremonies and coordinating law enforcement officials to award athlete medals. Jeffery has also served on the Polar Plunge committee since 2004, first in Branson and now in Springfield. He has obtained sponsors, set up events, recruited participants and even participated himself. Jeffery has been a Super Plunger at seven different Polar Plunges. A Super Plunger jumps into the freezing cold water every hour for 24 straight hours. That’s some serious dedication! Jeffery is also a Unified partner for softball and flag football. He competes on multiple teams with SOMO athletes and non-SOMO athletes. He’s also a SOMO coach. These roles have taken Jeffery all over the world. In 2007, he was chosen to run the final leg of the Law Enforcement Torch Run at the World Games in China. In 2010, he coached the Team Missouri basketball team at the USA Games in Nebraska, and he did so again in New Jersey in 2014. Most recently, Jeffery competed in flag football at the 2022 USA Games in Orlando, Fla. He helped his team earn a bronze medal!

The program conclude with the announcement of the Eunice Kennedy Shriver Award of Excellence. This year’s recipient is Diamond Pet Foods.

The EKS Award of Excellence is deemed the highest honor the SOMO Board of Directors bestows on an individual or organization for its years of service and impact on the SOMO Program.