Law enforcement officers serve selflessly every day to keep our communities safe places to live, work, and play. This year, we are celebrating a wonderful 30-year partnership with law enforcement in Missouri. How can you sum up 30 years? It’s not possible, but we can take a look back and try. What drives these officers? The constant light that Special Olympics athletes give through their inner and outer strength. Thank you to all of our law enforcement officers for your bravery every day in protecting us, and thank you for all your efforts to support our athletes.

The final of a three–part series
Written by: Crystal Schuster – SOMO/LETR Development Manager 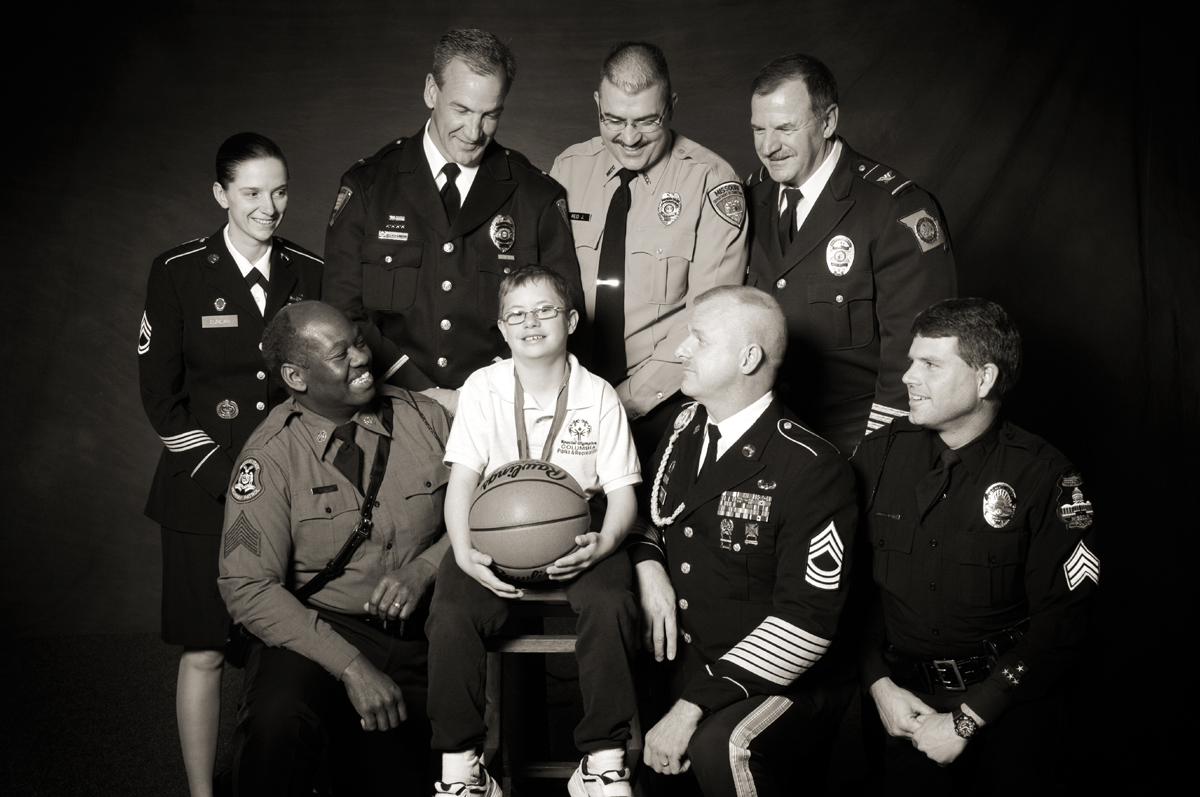 Although 2006 saw a hit, along with the rest of the word’s economy, officers still hit the pavement running. LETR funds raised dipped just under the $1million mark, but our officers never gave up. They sold over 21,000 t-shirts and added two new Polar Plunges to the mix – Branson and Kirksville. There was a photographer, in Jefferson City, that stepped forward and offered to do some photos for SOMO, and from that photo, a LETR poster was created that represented all agencies involved (PD’s, Sheriff’s Dept., MSHP, Corrections, Military Police) and showed them with their inspiration – a SOMO athlete.

In 2007, our LETR started seeing some new growth again by adding two more plunges – Cape Girardeau and St. Joseph – and they once again raised $1 million. This is also the year that Susan Stegeman, SOMO’s VP, was inducted into the International LETR Richard LaMunyon Hall of Fame!

2008-2009 saw growth yet again and our officers felt that there were more locations that could benefit from hosting a Polar Plunge. In these two years we added Polar Plunges in Louisiana (later moving to Hannibal), Columbia, Joplin, Mexico, and Maryland Heights. The Super Plunge was first introduced in 2008 as well. This event takes the Polar Plunge to new extremes by having Polar Bears Plunge 24 times in 24 hours! This event is held at Lake of the Ozarks and Kansas City. Officers increased their fundraising efforts tremendously in 2009 when they raised over $1.5 million. Part of this growth was due to a new, extreme event the officers decided to try in order to take their fundraising efforts to a whole new height – Over the Edge. This event still takes place in two markets today, St. Louis and Jefferson City, where “Edgers” rappel from the Jefferson Building and the Hyatt in downtown St. Louis. Also in 2009, LETR officers were honored to have Attorney General Chris Koster run with them in the final leg, in Springfield, although he felt that it was his honor to run amongst our LETR officers. 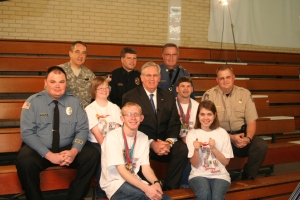 2010 was a memorable year, as officers celebrated the 25th annual Torch Run. Governor Nixon filmed a PSA in support of Missouri’s LETR and he welcomed runners back to the Capitol for a fun ceremony, after they recreated and ran the original torch run route. T-shirt sales went up in 2010, as it was a special shirt that represented every shirt that the officers had sold over the years.

In 2011-2014, new milestones were reached as officers pulled together like never before and raised over $2 million dollars consistently during these years. Events like Tip-a-Cops started expanding (and have continued to grow tremendously) and the Special Olympics message was being shared more and more. As the message spread, and athletes continued to inspire, our runner numbers grew – which meant we were consistently welcoming new officers into the LETR family. SOMO lost a great friend in 2011, SOMO athlete/hall of fame member, Gordon Barnes. Gordon spent a lot of time with his local LETR family in Jefferson City, and he never missed a Torch Run. Due to his contributions and support of his LETR family, the Jefferson City Torch Run route was officially named the “Gordon Barnes Memorial Route” in 2012. To this day, Gordon’s mom, Sarah, still comes to the run and supports her LETR family. She also volunteers to help at events whenever she can.

In 2015, LETR members in MO reached an all-time high for funds raised for Special Olympics MO – $2.5 million! Officers were commended for their efforts and were awarded with the Platinum award at the International Conference. During this same conference (which took place in Sept. of 2016), Chief Randy Boehm, Columbia PD, retired, was inducted into the International LETR Richard LaMunyon Hall of Fame.

Shop ‘n Save has remained an incredible partner through the years, and not a day goes by that we don’t appreciate all of their support. From Trivia Nights to Golf Tournaments and raising money through their “Round-up” promotions, they do whatever they can to support our officers and athletes.

As we end this 3rd decade of Missouri’s LETR, words simply cannot express our gratitude for all that Law Enforcement does. Through 2015, they have raised over $26.5 million dollars for the SOMO athletes. They don’t do it for the recognition or any glory they might receive. They do it because they see the impact that SOMO has on its athletes and the bond that they have with our athletes is truly inspiring. Law Enforcement officers go above and beyond for their communities every single day – but what they do for Special Olympics MO is indescribable. Thank you just doesn’t seem like enough, but on behalf of all 15,000 Special Olympics MO athletes, THANK YOU for being our HEROES!