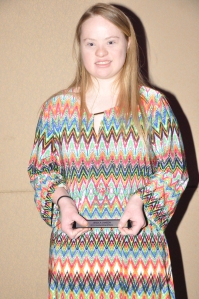 ST. LOUIS METRO AREA’S OUTSTANDING ATHLETE: JESSICA JANSEN — STATEWIDE WINNER!
Jessica Jansen is a SOMO athlete, but more importantly, she’s a leader. Jessica competes in SOMO sports year-round, playing basketball, bowling, track & field, bocce and volleyball. Not only is she an outstanding athlete on the court, she is a huge advocate for Special Olympics year-round as well. In this past year alone, Jessica spoke at several Knights of Columbus meetings to ask for their support of the new Training for Life Campus. She also gave a speech alongside her Unified Partner, Ivy Tinnin, at the Shop ‘n Save golf tournament gala. Last, but certainly not least, Jessica used the courage and confidence she had gained from these experiences with Special Olympics to give a speech at her high school graduation! Jessica embodies what the mission is all about by demonstrating courage, experiencing joy and participating in a sharing of gifts, skills and friendship with their families, other Special Olympics athletes and the community. Anyone who has had the opportunity to witness Jessica speak can tell you she has an amazing story and a contagious smile! She recently attended the first Special Olympics Missouri Athlete Leadership Programs (ALPs) University, where she declared a major in communications and committed to continuing to be a leader in her community by telling her Special Olympics story.

CENTRAL AREA’S OUTSTANDING ATHLETE: MATT HOOD
Throughout the 20-plus years of participation in Special Olympics, Matt Hood has been a part of countless competitions and events, and has also overcome many obstacles. When Matt was younger and first introduced to Special Olympics, one hurdle he had to jump was a condition called atlantoaxial instability. This condition held Matt back from participating in many Special Olympics sports, but he didn’t let it stand in his way. Matt attended the 1995 World Games as a member of the Missouri soccer team. In 2013, Matt was chosen to be on Team Missouri’s volleyball team. It was during a practice that the coaches noticed that he was favoring his left leg. He had to undergo another serious surgery in 2014 to decompress his spinal cord. As a result, Matt had to relinquish his spot on Team Missouri that year. This left Matt very disheartened, but again, this did not hold him back. It took quite some time to recover, but Matt made sure to always be a part of Special Olympics. Whether it was helping out at fundraising events or cheering on his fellow teammates and friends while competing, Matt has always been a team player. Matt is back on the volleyball court, his movement is limited, but he always does the best he can. Matt will also participate in bocce, basketball and swimming, his strongest sport. Throughout everything Matt has gone through, he has shown much perseverance and is truly an inspiration. His parents feel that if it wasn’t for Special Olympics, they wouldn’t have noticed in time that Matt needed help and he wouldn’t be the athlete he is today. Matt shows strength and determination in everything he participates in.

KANSAS CITY METRO AREA’S OUTSTANDING ATHLETE: ALLEN TOBIN
Allen Tobin has been an outstanding athlete in Special Olympics Missouri for 22 years. Over the years, he has competed in almost all of the sports SOMO offers and has excelled on the playing field, earning more medals than he can count! Allen was lucky enough to be selected to be part of the Special Olympics USA – Missouri softball team that won the silver medal in the 2015 Special Olympics World Games in Los Angeles. Being able to bring a silver medal and all the memories from LA back home to Missouri is one of his proudest accomplishments. Not only does Allen find joy in competing in Special Olympics, he has also taken advantage of many of the other opportunities that have been presented to him. He always jumps at the opportunity to help set up or tear down an event. Most times you don’t even have to ask him to load 10-foot bocce pipes in the dead of summer or roll up carpet from a sandy Polar Plunge beach in the freezing cold. He has also taken an active role in being a committee member for the Jimmie’s Miles for Medals event that raises money for Kansas City athletes. Allen was recently trained as a Global Messenger and has taken the skills he learned in the training to deliver exceptional speeches about his experiences with Special Olympics. With his GM training and being part of the SOMO Class of 2015, Training for Life Campus staff members know they can count on him to attend any presentation or fundraising campaign to help promote the TLC. He has also taken the leadership skills he has learned and applied them to the SOMO TV production team as a reporter. There really isn’t anything that Allen won’t jump in and do; he likes to try things out of his comfort zone and is always willing to help out the team! 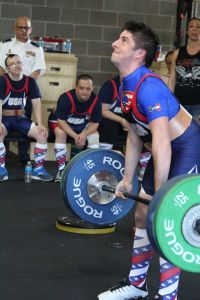 NORTH AREA’S OUTSTANDING ATHLETE: CHARLIE PHILLIPS
Charlie moved to Savannah less than a year ago. It didn’t take him long to make friends and for an entire school to get to know him. He joined the high school wrestling and football teams while also being a part of the Special Olympics powerlifting and flag football teams. His coaches constantly comment on his positive, “Never give up,” “I can do anything” attitude. Charlie immediately made an impact on his Special Olympics teams, his school, and his community. He is always supportive, happy and determined. Charlie gives meaning to the term sportsmanship and defines character. He is a friend, teammate and an example of how just one person can make a positive influence and bring unity to so much more than just a high school. When he is not participating in sports, he volunteers for many Special Olympics events. Charlie is a new member of the Youth Activation Committee in the North Area and is very excited to start spreading the word of inclusion in his school and community.

SOUTHEAST AREA’S OUTSTANDING ATHLETE: TIM KUNZ
Tim has participated in Special Olympics for more than 10 years, playing basketball, track and field and softball. Tim is a model athlete; he always has a smile on his face every time you see him. He is also a very loyal and dedicated athlete to Special Olympics. Tim is always asking his coaches and others how he can help. He is the first to show up and the last to leave. He is an outstanding fundraiser for Special Olympics. He has helped raise money for himself and his team to be able to participate at the 2010 USA Games and most recently 2015 World Games in Los Angeles. He participated in selling mums, softball fundraisers, restaurant nights, Knights of Columbus Tootsie Roll Drive and much more. He has a willingness to ask and the personality to gain the support of those he presents to. He asks not only for himself but for his teammates as well. At the 2015 World Games, he was so proud to represent this state and all Special Olympics athletes. Tim is a good athlete who sets a standard for others to follow. He has a positive attitude and helps all others he comes in contact with. He is an asset to every team he is on and he is certainly a huge asset to the Southeast Area.

SOUTHWEST AREA’S OUTSTANDING ATHLETE: SETH DYE
Seth Dye has been participating in Special Olympics for more than 13 years. He competes in bowling, basketball and track and field. He also attends as many fundraisers as he can. This year he ran in the Unified Relay Across America and carried the torch. He is also trained a Global Messenger. Seth is a team player and shows amazing sportsmanship. He is the most kindhearted person that you could ever meet and shows this in everything that he does. Seth truly leaves a lasting impression on everyone who meets him. The Southwest Area is proud to have an athlete such as Seth. He is a role model for everyone.