Jeff Cook, a patrol supervisor with the O’Fallon Police Dept., was selected as Missouri’s representative for the 2015 Special Olympics World Games Law Enforcement Torch Run Final Leg. Cook will be providing updates on his adventures in Los Angeles as part of the Final Leg. 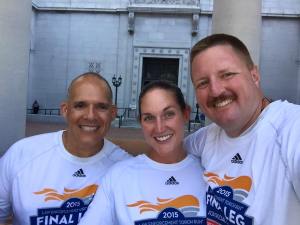 Los Angeles City Hall
The Hall of Justice
Griffith Observatory
A couple of nice short runs this morning in downtown LA. We had impressive crowds and the energy in the city surrounding the Games continues to grow. We had several team members selected to go on the roof of the US Bank Building this morning with the torch. This is the tallest building west of the Mississippi.

We got a great view of the valley and the Hollywood sign. Bob Cormier did a great job at the Hall of Justice, speaking on behalf of his fellow superheroes!

Santa Monica Pier
(setting of Three’s Company)
We had our loudest run in and everyone gave it their all for this final run in Santa Monica. Nigel Davis did a great job sharing a personal story of violence in his life and how Special Olympics helped him build the courage be to stand up for and defend himself from bullies in Jamaica. A good final run.

We had one of our last meals together after our final run today. LAPD had a nice dinner set up at City Hall for us. Team 5 was blessed to have Allen Ronaldo Jones back and free from the hospital. Due to the wonderful world of technology we used FaceTime to call and get Claire Hawthorn on the phone for a good team picture.

All of the athletes had an amazing time dancing and proving how far each of them can come in a short time with support.

LA84
Breakfast this morning hosted by the LA84 commemorative Olympics library and historical venue. The grounds were very nice and the display of past Olympic torches was very cool. An eternal flame and 84 Olympic Torch was available for photographs.

ESPN – turn it on
We are headed to the Opening Ceremonies at the Coliseum right now. For my local support, I will be the 10th officer from the stage along the corridor, right side facing the stage.

I am a Guardian of the Flame!

Dressed and headed to the Coliseum for Opening Ceremony to kick the Games off and bring in our coveted torch and athletes.

The 124-member of the 2015 Law Enforcement Torch Run Final Leg will be finishing our journey and our mission shortly by delivering the Flame of Hope for the 7,000 athletes filling this stadium.

(And Rocco even showed up with Mom and Dad)

Any journey has its trials, however, we did our job tonight and delivered the Flame of Hope with dignity, respect and honor for the athletes of these Special Olympics Games.

This has been revered at the largest sports and humanitarian event in Los Angeles since 1984. I represented my family, my department, Special Olympics Missouri and myself with great pride this evening.