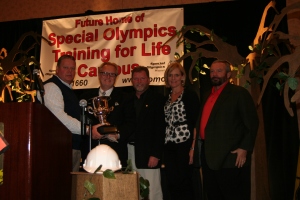 Each year, the Special Olympics Missouri Board of Directors chooses to recognize one organization who has made a lasting impact on our program. It is the highest honor bestowed by SOMO. The Missouri Sports Hall of Fame was chosen as the 2012 recipient.

Members of a task force formed by our Special Olympics Missouri Board of Directors began having conversations about a Hall of Fame for Special Olympics Missouri in 1996.  Their recommendations, followed by board approval, established the Hall of Fame awards process, which still today in 2012, is the highest award we give to an athlete and a volunteer.  Upon the creation of this award, we reached out to Jerald Andrews, Executive Director of the Missouri Sports Hall of Fame.  The museum, which is located in Springfield, recognizes and honors the best in Missouri sports.  It was our hope to be recognized among them.  With Jerald’s leadership and the support of the Missouri Sports Hall of Fame, we were allowed to create a permanent wall in their museum which recognizes our SOMO athletes and volunteers.  The wall display allows us to showcase pictures of our program.  Each year we add names to the plaque on the wall honoring our inductees.  These names date back to our first inductees in 1997.

The Missouri Sports Hall of Fame hosted our Induction Ceremony from 2000 to 2004 in their facility at no charge to us.  This allowed more family members to attend the ceremony.  Jerald and other members of the staff served as the Masters of Ceremonies.

Their support goes even further in that they incorporate our inductees into their Enshrinement Ceremonies each year.  Our inductees are invited to all functions and recognized on stage with a plaque.

In 2010, the Missouri Sports Hall of Fame selected our President & CEO, Mark Musso, to be a member of their Enshrinement class.  Mark was honored in all the activities that surrounded the enshrinement.  He was given the chance to speak to the group of over 1,000 and recognized in program books, trading cards and on calendars and posters.  There is no way to place a value on the publicity that SOMO received by being part of a distinguished class of Missouri sports figures.

In addition, through our relationship with the Missouri Sports Hall of Fame, we have been a benefitting charity of the Price Cutter Charity Golf Championship since 1992, a donation which has totaled more than $500,000.

The partnership we have with Missouri Sports Hall of Fame is one of the strongest we have in the state.  Their acceptance of SOMO as a sports program happened immediately in 1997.  The partnership has grown stronger every year since that time.  We enjoy a relationship with Jerald still today and thank him for his years of service to our SOMO Board of Directors and former SEF Board.

It is an honor to recommend that the Missouri Sports Hall of Fame be honored as our Award of Excellence winner for 2012.