This story is written by SOMO athlete Becca Tincknell as part of her Athlete Leadership Program (ALPs) University practicum. This practicum is part of the School of Technology in ALPs University, and will put her one step closer towards graduation from the program. If you want more information about ALPs University after you enjoy Becca’s story, click here.

My story is about when I went to Dublin, Ireland. The first time I went to sports camp the head group leader was there. Her name was Susan Shaffer and there was another group leader his name is Gary Brimer. They asked me if I wanted to play team handball at first then they decided that they wanted me to try out for tennis for Team USA. A couple of days later they called me to tell me that I‘m going to Dublin, Ireland, for Team USA . I never played tennis before they told me to start practice at home and with some of the other members. In June of 2003 Team USA traveled to Florida then we traveled to Ireland and we flew on Air Force 1 that the President let us borrow. We played tennis got to go to a beach and team USA went to a mall for a whole day with our parents. We had a lot of fun, we met celebrities like Colin Farrell, Maria Shriver, Pierce Bondsman we had a couple of days off we watch others play and then it was the individual tennis skills teams turn on the last day I seen Eunice Kennedy Shriver and couple of years later she passed away. I got a gold medal and it weighs a lot more than the other medals and I had a nephew born a couple months before we went to Ireland. I compete against team Italian, Iran USA., Pakistan. I got a stuff animal dog from Ireland her named is Racateer. My coach is Kathy. They learned that I was both handed. There was only four ladies from Jefferson county Becca Tincknell, Jane Howell, Sarah Surdyke, and Michelle Beamon. 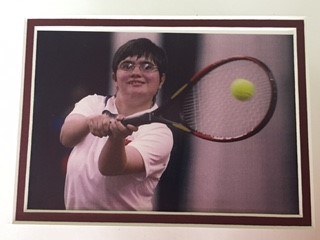