This is the fifth blog post (find others on our blog homepage!) in a series from Special Olympics Missouri Public Relations Manager Brandon Schatsiek who is in Los Angeles covering the 13 Missouri athletes competing for Special Olympics USA at the 2015 World Games.

While Sarah and I were enjoying a day off at the museums, stores and beaches around southern California, our good ole’ Missouri boys were busy kicking butt at UCLA. 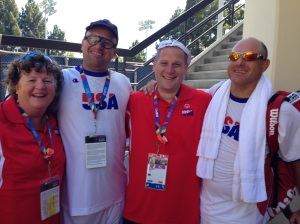 Bobby Williams, second from left, poses for a photo with his coaches and his doubles partner Jeff Scott from California. Thanks to Bobby’s mom for the photo!

First up was Bobby Williams who took to the court with Jeff Scott from California vs. Switzerland early this morning and dominated them winning 6-1, 6-1 and were in command the whole way. Their gold-medal match came in the afternoon against Belgium and Bobby’s mom said it was a great one. After falling behind in the first set 4-0, they came all the way back to win 6-4. They dropped the second set 4-6, but won in a close tiebreak 10-8 for the gold medal! Bobby’s mom said he and Jeff, despite not playing together in doubles before World Games, played really well together and Bobby had some really great shots. The guys will receive their gold medals at 2 p.m. on Thursday. We’re so proud of you, Bobby!

The softball team played Mexico again for the second time in two days and while this game was closer than the first, our guys still won 16-13. Coach Shaffer said the team started much better today than in past games and led 5-4 after the 1st. The game was a tense one with the US leading after three innings 14-7, but they failed to shut the door on Mexico and scored 0 runs in the 4th, while Mexico plated 6, bringing it to 14-13 US after four innings. Robin Anderson said she was nearly having a heart attack in the stands, the game was so close, but in the end, our guys added two runs in the top of the 5th and held Mexico to 0 in the bottom to end the game 16-13.

Coach Shaffer said James Johnson continued his hot streak at the plate with two hits in the game, while the defense overall was pretty good. What mistakes did happen weren’t followed by other mistakes and that was key. The team was able to put the errors behind them quickly and move on.

They look for revenge against the only team to beat them so far this week: Canada. The game is at 10 a.m. at UCLA.