This is the fourth blog post (find others on our blog homepage!) in a series from Special Olympics Missouri Public Relations Manager Brandon Schatsiek who is in Los Angeles covering the 13 Missouri athletes competing for Special Olympics USA at the 2015 World Games.

Competing at the 2015 Special Olympics World Games and representing the red, white and blue is something that all 13 Missouri athletes (12 softball and one tennis) will never forget, but I think it’s the off-field/off-court activities that our guys are going to remember more than anything. Today the softball team was afforded on such opportunity — to attend a Los Angeles Dodgers game and be on the field during batting practice.

But before they could do the fun stuff, they had business to attend to — a match-up vs. Bharat (India). 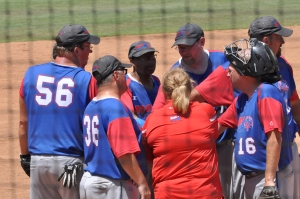 This team is nothing if they aren’t consistent and they have consistently (from scrimmages vs. Arizona and Southern California earlier in the week and throughout the first three games against Australia, Canada and Mexico) been a slow-starting team. In divisioning, teams bat through their entire order in the first inning, so organizers can get a good look at everyone to make sure they end up in the right division against comparable competition.

So far, the guys have consistently been behind teams following the 1st inning because of fielding/throwing errors and untimely hitting. They were down 11-4 vs. Canada, 7-3 vs. Mexico and 7-4 vs. India again on Tuesday. Then they’re forced to try and claw their way back in it and it’s worked out pretty well against everyone but Canada so far. That trend continued Tuesday with India scoring 7 in the first inning and leading 7-4 at the end of the 1st.

The guys had great pitching and defense in the 2nd inning and forced India to go three up, three down. Then at the plate USA scored eight straight runs to begin their half of the inning and they were able to hold onto a huge 12-10 win. 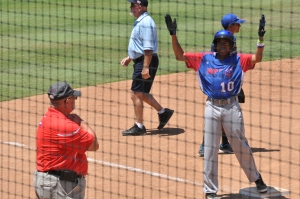 Coaches mentioned that they’ve noticed their team starts out flat, but they’re kind of at a loss as to how to change it at this point — “it’s just who they are,” said coach Stan Smith with a smile. “We just need to fight through it.”

“I really do think their heads were elsewhere today, especially with them going to the Dodgers game following their game,” coach Dana Griesinger said. “It’s all they talked about this morning.”

Following divisioning play, they’ve now been placed in the 2nd division with Canada and Mexico. They will play Mexico at 2:30 p.m. Wednesday and Canada at 10 a.m. Thursday.

We’ll get to their Dodger Stadium experience in a bit, but first, how did Bobby fare on Tuesday?

Bobby and his doubles partner Jeff Scott from California lost both matches vs. Costa Rica and Belgium. His mom said that she missed nearly all of the matches because they were stuck in traffic for two hours. Have you ever heard people talk about LA traffic? Yeah, it’s that bad.

She got the rundown from the coaches who said Bobby and Jeff also got off to a slow start on Tuesday and while they did a good job of finishing strong, it put them in a hole that was too hard for them to dig out of completely. Bobby and Jeff are set to begin their competition schedule today now that divisioning is completed. They play at 10 a.m. and 2 p.m. on Wednesday at the UCLA Tennis Center. Good luck Bobby and Jeff!

Immediately following the win vs. India, the softball guys hurried to the locker room to change and hop on the bus that was arranged for them. Because they had plenty of time, the bus took the long way and traveled all the way down Sunset Boulevard where guys could ooh and ahh at the multi-million dollar homes. A few freaked out when they saw some guy from the TV show Storage Wars driving an old car in front of us. I’ve personally never seen the show to tell you one way or another, but Tim Kunz was adamant it was him and was really excited. 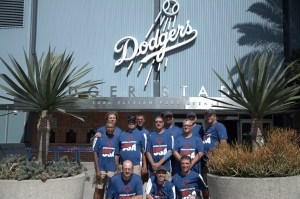 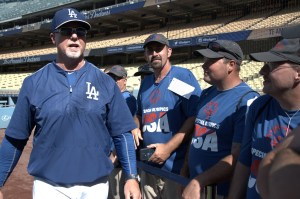 Mark McGwire talks to the guys 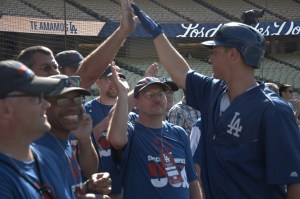 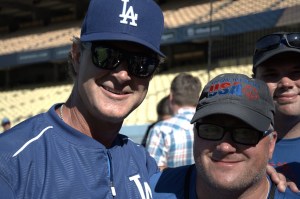 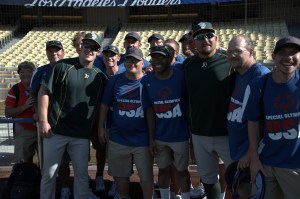 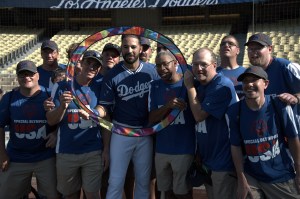 Once we arrived at the stadium, we took a few photos and then headed inside where we were met by Dodgers PR/Marketing staff and two people from a TV crew who mic’ed up Jason Parrish for the experience. He was a little hesitant at first, but we couldn’t have picked a better athlete and all-around person to be on camera representing USA and Missouri.

You know the guys are in awe of what they’re experiencing when the most talkative guys on the team who NEVER shut up are silent. As soon as we stepped on the field most of them just stood there, not saying a word, just soaking it all in. So many of them knew the players (from both teams) that were in front of them and could tell you their statistics for the year. Again, it’s just another way to show that sports as a whole means so much to them. Sure it’s nice to compete and win, but it’s more about that shared experience and they can relate to a lot of what professional athletes deal with just on a smaller scale.

Several players and coaches came over to greet the team and take photos with them including Joc Pederson, Andre Ethier, Don Mattingly and more. The two guys who got the largest cheers though were former Cardinals great Mark McGwire (hitting coach for the Dodgers) and former Royals player Billy Butler (now with the Oakland Athletics). They were SO excited when they saw them and kept yelling their names until they came over to say hi. No matter who it was that came over to see them, it wasn’t a quick photo and then they left, they were genuinely interested in how the softball games were going, asking who the hardest hitter on the team was (Jason Parrish), the fastest player on the team (Tyler Scott), etc. It was a ton of fun getting to see them just be like anyone else and forget about everything else that’s going on in their lives right now and just be able to talk athlete-to-athlete.

I was really hoping that Joc Pederson (one of the best young players in the game and probably leading candidate for National League Rooking of the Year) would come over because he could relate even more to the guys than most because his older brother has Down syndrome and competes in Special Olympics. You also might remember him from this touching moment during this year’s Home Run Derby. Of course, some of the guys already knew this and instead of “talking shop” and asking him about hitting or fielding and getting tips, they asked more questions about his brother. I think Pederson appreciated that the guys were genuinely interested him his story.

I know I’ll never forget that moment, not because it was cool for me to be down on the field and meet the players (which it totally was 🙂 ) but because the looks on all of their faces were priceless as they took the field and player after player came over to meet them.

The game itself was meh with the Dodgers losing 2-0 and only getting three hits, but our guys were treated like royalty and I know it’s an experience they’ll never forget and we’re all greatly appreciative of Justin Turner and the Dodgers staff making this happen.

This post is already more than 1,300 words, so I’ll end it here and just to let you know, Thursday’s post is going to be a little light because we’re taking the day off to do some touristy things, but we’ll still have information on how Bobby and the softball team fare on Wednesday.