At competitions Matt can always been seen trying his hardest and cheering for others. What is most impressive about Matt is his ability to be a leader in his school. He has become a huge voice around Missouri, but especially in Kansas City, for recruiting youth volunteers. He is the chairman for his school’s Fan Club and is the co-chair of Missouri’s Youth Activation Council. Beyond all this, Matt gives 100 percent to whatever sport he is playing, which says volumes since he plays eight sports! 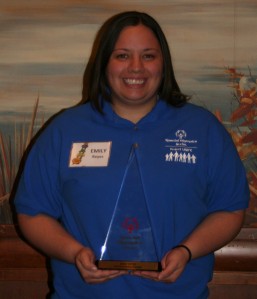 During her freshman year in high school in 2005, Emily volunteered to help with her school’s Special Olympics team. After that introduction, he became certified to coach bowling, basketball and track. Since that time, she has served as a counselor at Athlete Sports Camp and participated in many special events. Emily recently finished her four year term on the National Youth Activation Council for Special Olympics, Inc. She’s traveled the country as part of this prestigious group. She continues to stay involved even while in college. 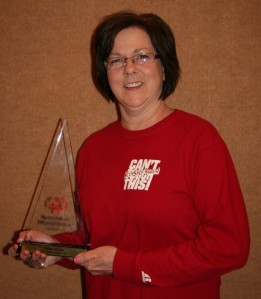 For the past 25 years, Terri has coached SOMO athletes. She has brought countless athletes out of their shell and introduced them to a new way to make friends and build confidence through sports. She organizes and coaches six sports and hundreds of athletes in Jefferson County. When one of Terri’s athletes qualified for the 2011 World Games in bocce, Terri was inspired to begin fundraising for a state-of-the-art bocce court for all the athletes through her program.

The success of the Lake Viking Polar Plunge is due in large part to the Rash Family. Six years ago they stepped up to start the plunge at Lake Viking. Both Judy and James pour their heart and soul into the planning and fundraising for this event. James has become a coach for their son Pierce’s basketball and flag football teams. The whole family continues to seek new ways to improve our program and offer opportunities for everyone to participate.

Congratulations to all of our winners! Their outstanding contributions helped make this a great year for Special Olympics Missouri.